This week marks an important anniversary in film history: May 25 is the 40th anniversary of the release of the original film Alien.

This film essentially reinvented the sci-fi/horror genre, which for years had languished as a B-film wasteland of cheap effects, poor writing, and weak scares. The strength of this film has led to five direct sequels, two crossover films with the Predator franchise, dozens of board, role-playing, and video games, and countless imitations and merchandise.

Much of the film’s popularity stems from its ability to portray a visceral horror that is hard to capture on screen. The way it represents that horror is a powerful reminder for why so many people with sleep apnea find it difficult, if not impossible, to adapt to CPAP. 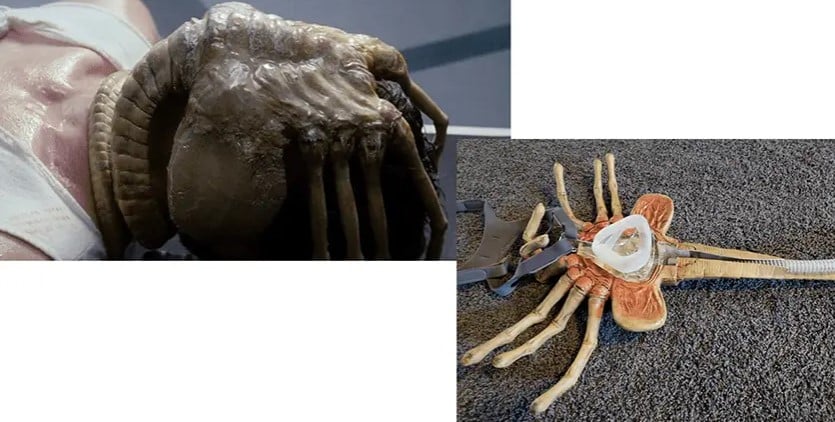 Overpowered by the Facehugger

A quick plot summary can help remind you of the context. In the film, the crew of the freighter Nostromo lands on a small planet to investigate what they are told is a distress signal. When some of the crew enters a derelict alien ship, they find many eggs in the cargo hold. A crew member gets close to one of the eggs, and an alien leaps out of an egg and attacks.

The alien which emerges is usually called a “facehugger,” and it resembles a dismembered hand with a long tail. The alien excretes acid to burn through the crewman’s spacesuit. The fingers wrap around the man’s head like straps while the tail wraps around his throat. It inserts a tube into his mouth and disables him with a paralytic enzyme.

The man, who was the ship’s second in command, is completely taken down by the alien in a matter of seconds. As the man lies on the table, seemingly asleep, he looks very much like someone wearing a CPAP mask.

One of the important similarities between the alien facehugger and CPAP is constantly neglected: they’re both lifesaving. When the crewman’s spacesuit was broken open in the planet’s thin atmosphere, he would have died if left on his own. However, as we learn, the facehugger is actually supplying him with oxygen so he doesn’t suffocate.

It’s like the CPAP mask in this way: it provides a lifesaving benefit, but at what cost? And is that bargain worth it?

For many people, it’s just not. The sense of being smothered under the CPAP mask is too horrific (even without the consequence of having an alien egg implanted in you) to trade for the lifesaving benefit, which remains abstract and distant. It’s a nightmare-inducing setup, especially for people with PTSD. These people need an alternative, because without treatment, their condition can indeed be fatal.

Of course, for other people, this isn’t as important a detail. In fact, some people see this as humorous–there are CPAP masks actually designed to look like facehuggers. These people can and should use their CPAP.

Can’t Adapt to CPAP? We Can Help

Ironically, we have been practicing dentistry almost as long as the movie has been out. Most of that time, he’s been helping people deal with their sleep apnea using a very effective alternative to CPAP. And if you find that you can’t adapt to CPAP–or can’t even try it–he can help you.

To learn more about the benefits of CPAP alternatives in Omaha, please call (402) 493-4175 today for an appointment with a sleep dentist at the Advanced Dental Sleep Treatment Center.