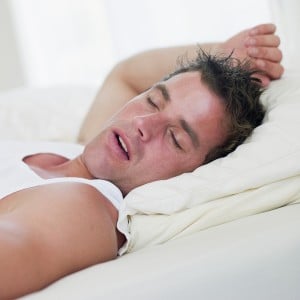 In sleep apnea, relaxed muscles contribute to airway collapse. Inspire is surgically implanted in the body and electrodes are connected to a nerve that controls the muscles of your airway. The electrodes stimulate the nerve, which then tells the muscles to keep active so they don’t relax and collapse the airway.

Inspire published the primary clinical study in support of its application for approval. The study implanted the device in 126 sleep apnea patients, most of whom (83%) were men. The participants had a mean age of 54.5, and a mean BMI of 28.4 (in the overweight range). They all had a history of trying CPAP, but not being able to adhere to it, and 17% of them had undergone sleep apnea surgery.

The participants had follow-up visits at 2, 6, and 12 months, with polysomnogram studies at each follow-up. The mean number of apnea-hypopnea incidents (AHI) decreased from 29.3 to 9.0 events per hour, and the number of times their blood oxygen levels dipped decreased from 25.4 to 7.4 times per hour.

Not all patients saw good results, however. The primary goal of the study, reducing AHI by 50% and to less than 20 events per hour was met by 66% of the participants, and a reduction of oxygen deprivation of 25% was met by 75% of patients.

The study also included a therapy-withdrawal study. They took 46 patients who had responded to the treatment and randomly divided into two groups. One group maintained treatment, but the other group had their implant turned off. The group with the implant turned off returned almost to the level of sleep apnea they had before the study, while those who maintained in the therapy kept their sleep apnea under control.

The benefit of the Inspire treatment is clear. For people who can’t tolerate CPAP, this gives them another option for an easy treatment alternative that they can comply with. It can give great results, leading to higher quality of life and likely reversing many if not all of the negative effects of sleep apnea.

However, the treatment doesn’t benefit everyone. With an effectiveness of about 66% according to their primary measure, this is not a universal cure. Hopefully, future studies will give us a better idea about who will benefit from this treatment so we know who to recommend for this, since we know with almost 100% certainty who will benefit from oral appliance therapy, it will be nice to know whether this helps people that oral appliances won’t.

Another concern with this therapy is that it does require surgery. In this group, surgical complications were low, but 84% of participants had at least an overnight stay in the hospital, and 5% spent two nights in the hospital. There were many expected complications of surgery that were not serious.