What If the Last Woman on Earth Used CPAP? 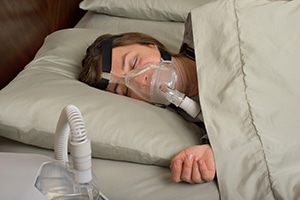 In the new Fox comedy The Last Man on Earth, Phil Miller thinks he’s the only person who survived a deadly virus that swept the earth in the year 2020. Then he discovers he’s not alone. He meets a young woman, Carol Pilbasian, and the two of them get married in order to repopulate the earth.

But when Phil moves in, he learns that among Carol’s unattractive traits is her CPAP machine, which is the beginning of the end for their budding marriage.

CPAP Is Always an Intrusion

One thing that The Last Man on Earth gets right about CPAP is that it’s always an intrusion into your bedroom. Carol has to wear the mask in order to keep her sleep apnea under control. When she doesn’t tighten the mask fully, it makes a terrible, disruptive sound when the air escapes around the edge of the mask. When she does tighten the mask fully, it causes pressure sores on her face, which she can’t tolerate.

The CPAP mask pushes Phil over the edge. Where he had barely found Carol tolerable before and wishes he had waited until after meeting another woman to get married, the CPAP mask causes him to beg God for a “do over,” and when he meets two other women, he tries to run away with them, which results in a divorce when Carol discovers this attempt.

This is not the first relationship undone by CPAP, though–in the context of the show, at least–it might be the last.

CPAP Isn’t Part of You

When Phil complains about Carol’s CPAP machine, she responds, “Sleep apnea is a part of who I am,” and she’s right. Sleep apnea is part of your identity, and it’s important to acknowledge that it often can’t be cured, only treated. CPAP, though, is not the inevitable consequence of sleep apnea. If you have sleep apnea, you have other treatment options, including oral appliances, which are more convenient, more comfortable, and don’t have side effects like pressure sores and a noisy pump or mask.

If you would like to live life without CPAP, we can help. Please call (402) 493-4175 today for an appointment with an Omaha sleep dentist at the Advanced Dental Sleep Treatment Center.