Increased Risk for Heart Disease among Women with Sleep Apnea

Although we tend to think of snoring and sleep apnea as something that men suffer from, it’s not uncommon for women to develop these conditions, too. And some research indicates that women might suffer more severe consequences as a result. One study suggests women’s cancer risk may be linked to sleep apnea, while men’s may not. We also have a study showing that women’s heart risk may be more linked to sleep apnea than men’s. 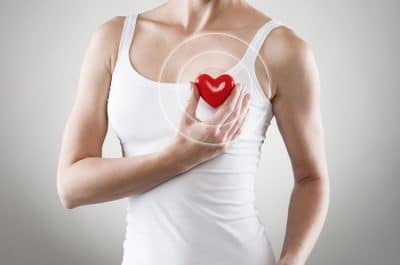 This study highlights the increased risk of heart disease for women with sleep apnea. However, the study showed no such increase for men. This doesn’t mean sleep apnea is safe for men, though.

This study, published in the prestigious journal Circulation, looked at sleep apnea and cardiovascular problems in more than 750 men and nearly 900 women with moderate to severe sleep apnea, confirmed by polysomnography. They were also given tests of their high-sensitivity troponin T levels (hs-TnT), a predictor of heart stress. The study population was followed for an average of just under 14 years. For study participants who were still alive, echocardiograms were given after about 15 years to analyze the shape of their hearts.

Researchers found that in women, levels of hs-TnT were related to sleep apnea, as was an abnormal heart structure. They also found that for women, their ultimate cardiovascular outcome, such as heart failure or cardiac death, was associated with sleep apnea.

But these results didn’t hold up for men.

They noted that this underscores how important it is for women to get screened for sleep apnea.

Where Did the Risk for Men Go?

This study deviates from many previous studies that link heart disease with sleep apnea for men.  But this doesn’t mean that men aren’t still at risk related to their sleep apnea. There are many reasons why this study might have shown no elevated risk for men. Most likely, it’s related to the fact that the heart risk for the “average” man of this age 62.5 already includes sleep apnea risk to some degree. Many men in this age group have sleep apnea and most of them are undiagnosed. It could be related to the many confounders, such as sleep apnea leading to weight gain and reduced exercise, both of which are related to heart risks.

Science is a process, and we expect some incidental disagreement among studies. The bulk of data still indicates that sleep apnea increases heart disease risk for men.

What Causes Snoring and Sleep Apnea in Women

In order to combat heart and other risks of sleep apnea, it’s important to understand its causes. Although women tend to snore less than men, we are beginning to understand that more may snore than we’ve previously suspected. For example, one study found that although women in one population snored as much and as loudly as men, they were less likely to admit it.

Snoring and sleep apnea are linked to many common causes in men and women. For women, the most commonly cited causes include:

The risk of snoring and sleep apnea increases with age for women as for men. However, the risk jumps up significantly at menopause. There is some evidence that hormone replacement therapy (HRT) could help cut this risk.

For women, as for men, weight gain can cause an increased risk of snoring. Weight gain can lead to fat deposits on the throat that push the airway closed. Sleeping position makes a difference. Sleeping on your back encourages the airway to collapse. Side sleeping can help control snoring.

Use of several different substances are associated with an increase in snoring and sleep apnea. Sleeping medications can help a person sleep, but they relax the muscles that hold the airway open, making the airway more likely to collapse. Alcohol is also a muscle relaxant and can have a similar effect. Smoking causes snoring in a different way. Smoking irritates the nose and throat, causing swelling. This narrows the airway and can trigger snoring and increase the risk for sleep apnea.

Get Treatment for Sleep Apnea in Omaha

If your bed partner is complaining about your snoring or you notice symptoms of sleep apnea, it’s important to take steps to control your risk. A sleep dentist can help you get tested for sleep apnea. They can also help you get effective, convenient, and discreet sleep apnea treatment.

If you have questions about your personal sleep apnea risk, please call (402) 493-4175 for an appointment with an Omaha sleep dentist at the Advanced Dental Sleep Treatment Center.