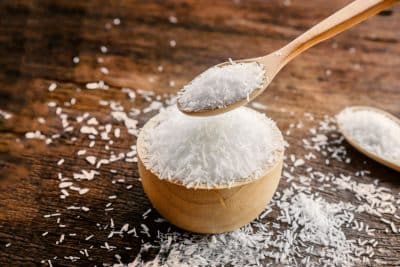 Although most people think of it as being in Chinese food, MSG (monosodium glutamate) is a common food additive in many types of processed foods. It’s a salt of glutamic acid, and a very common compound found naturally in foods. MSG has been blamed for many side effects, including jaw pain, headaches, and other problems, but the association is controversial.

It’s also been blamed for sleep problems in some people, and has been shown to increase snoring in people with normal weight in some studies, but, again, the association is controversial.

Sleep problems are among the most commonly reported side effects of MSG. You can see one here, for example, and the side effect has even been reported in some semi-authoritative sites.

There is also some research that supports the connection between sleep problems and MSG.

But it’s not a simple connection, as if eating MSG automatically interferes with your sleep. Instead, there’s a dose-dependent relationship, in which administration of small amounts of glutamate actually increase REM sleep time. It’s only as doses increase that glutamate begins to make it hard for test rats to sleep. The REM sleep finding was confirmed in a recent study, which found that total sleep and slow wave sleep were not affected by glutamate.

MSG was also found to be associated with increased snoring of normal-weight individuals. In this Chinese study, they assessed the intake of MSG of more than 1200 individuals in 2002, then gave them sleep questionnaires in 2007 to attempt to determine whether individuals snored or had sleep-disordered breathing, which includes many related conditions, including sleep apnea. They found that normal-weight individuals were twice as likely to snore, and three times as likely to have sleep-disordered breathing if they ate a lot of MSG.

The biggest caveat to this study, of course, is that the two data points were taken FIVE YEARS APART. I’m not sure you’d want to judge my current health on the basis of what I ate five years ago.

Should You Avoid MSG?

As with anything, if you expect food is affecting your sleep, start a sleep and diet journal. Record what you ate and how you slept to determine whether there is any connection. Overall, there is good reason to accept the conclusion that MSG is mostly safe, especially in reasonable levels, though there is a possibility that some individuals are especially sensitive.

If you are experiencing sleep problems like snoring or sleep apnea and you’re looking for a nonsurgical, comfortable, and convenient treatment, please call (402) 493-4175 for an appointment with an Omaha sleep dentist at the Advanced Dental Sleep Treatment Center.