Nightmares Waking You May Actually Be Sleep Apnea

If you are waking up with nightmares on a regular basis, these may not actually be the main problem. Instead, it may be sleep apnea that is the primary cause of your waking, and you need to talk to a doctor or sleep dentist. 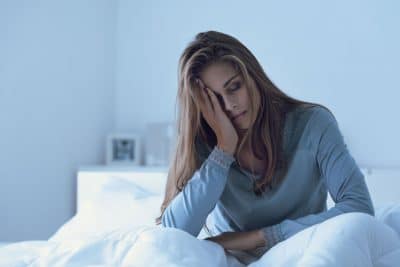 Night terrors are a type of parasomnia, a sleep disorder, in which people experience extreme feelings of fear or anxiety during sleep. Parasomnias include many disorders where people do, say, or feel things that they can’t explain rationally. It includes sleep walking and sleep-related eating disorders. People awaken as a result of the feelings of fear. However, they often can’t describe why they awakened other than the feeling itself.

Nightmares are in general just a type of dream. People report that they are especially vivid and disturbing. Nightmares are different from night terrors because people actually experience them as dreams. Rarely, people may awaken from these dreams, often with a sense of terror. There are many potential causes of nightmares, some of which are benign, while others require attention. Sometimes, nightmares can be classified as a parasomnia, if the nightmares make it hard for people to get to sleep, stay asleep, or function during waking hours. This might be due to the frequency or intensity of bad dreams.

Sleep apnea may also be to blame for your nightmares. During sleep apnea, your brain senses the low oxygen and realizes that you are under a very real threat–you are being choked or smothered by your own body–and if nothing is done you will die. As part of the body’s response to the apnea, your heart will be racing and you will be gasping, similar to the experience of waking up in terror.

Night terrors have been recognized as a sign of sleep apnea in children, and it makes sense that many adults who experience the phenomenon may also be suffering from sleep apnea. This means that people who are waking as a result of night terrors or nightmares should talk to their doctor or a sleep dentist about sleep apnea.

If you want more information about sleep apnea in Omaha, please call (402) 493-4175 for an appointment at the Advanced Dental Sleep Treatment Center.