What is less well known is the apparently strong association between sleep apnea and type 1 diabetes, but we’re coming to understand the impact of this link.

Understanding the Difference in Diabetes 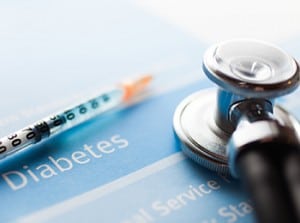 Type 1 diabetes is often called childhood or juvenile diabetes because it is diagnosed in young children. In this type of diabetes, people don’t produce the hormone insulin, which is necessary to allow sugar (glucose) to enter the cells of the body and produce energy. Insulin is typically produced in the pancreas, but in people with type 1 diabetes, pancreatic cells are damaged or defective and don’t produce insulin.

In type 2 diabetes, the cells become resistant to insulin, so even though your body is making it, it won’t do its job.

Sleep Apnea Is Common in People with Type 1 Diabetes

Although it’s too early to state a definitive link between sleep apnea and type 1 diabetes, it seems that one possible cause is simple, but alarming. In type 1 diabetes, it’s common for people to experience peripheral nerve damage, especially if their diabetes isn’t being well controlled. At least one study has postulated that this nerve damage is responsible for sleep apnea. With the nerve damage, the neck tissues aren’t stimulated to the same degree, and are more likely to collapse at night, even without the extra burden of fatty tissue.

We know that sleep apnea is associated with greater damage to various structures by diabetes, but we’re not sure whether sleep apnea is the cause or the effect of this damage.

But we do know that sleep apnea treatment can be crucial to improving the health, happiness, and longevity of type 1 diabetes patients. If you are looking for sleep apnea treatment in Omaha, please call (402) 493-4175 for an appointment with a sleep dentist at the Advanced Dental Sleep Treatment Center.