Sleep apnea is a condition that is almost completely exclusive to people. The only known exception: bulldogs and some other short-faced dog breeds. In fact, it was by studying bulldogs that the inventor of CPAP developed his concept.

Humans and bulldogs both get sleep apnea because of our shortened faces, and while bulldogs were intentionally bred for their faces, in humans our face shortened as part of our adaptation to speech, which also makes us vulnerable to snoring and sleep apnea. 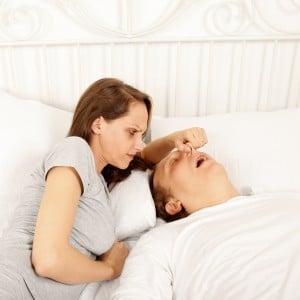 Perhaps the biggest adaptation for speech is the change in the shape of our jaw. The smaller jaw makes it easier to manipulate tongue and teeth to make specific sounds. With a shortened jaw, there is less room in the airway, and it makes it more likely that sagging tissues in the mouth (including the soft palate, also adapted for speech) can fall back and either narrow the airway–causing snoring–or block it altogether–causing sleep apnea.

As part of our adaptation for speech, our tongue extends further back into the throat than in other animals. During sleep, the tongue can relax and fall back to narrow or block the airway, leading to another source of snoring or sleep apnea.

The larynx or voicebox also moved in humans to help us make speech sounds. It descended further in the throat to create a resonance chamber in the upper throat, which can help make your snoring louder.

The larynx also has muscles, cartilage, and even a bone to help support the throat. With it moved down, there is less support for the upper throat, which essentially hangs off the jaw for support. This means that a poorly positioned jaw can also cause your airway to narrow or collapse, which is why oral appliances that can advance your jaw and improve support work so well for so many people.

There are other things that contribute to the shape of our airway, including our upright posture. When we stood upright, it created a 90° turn in our airway, which also makes it easier for our airway to get closed off. And because our bodies are set up so that sleeping on our back is easy and comfortable, we do it often, and this orients us so that gravity pulls our airway closed.

And obesity is a major factor, too, since weight on the throat makes collapse of the airway more likely.

Support for the Theory

Although we’re not entirely sure about the role of these evolutionary changes in sleep apnea, at least one study looking at the role of shortening of the midface and the descent of the larynx found these features increases the risk of sleep apnea.

Since anatomy is the chief cause of sleep apnea, it makes sense that an anatomically-targeted solution like an oral appliance would make the best sleep apnea treatment. To learn whether this treatment is right for you, please call (402) 493-4175 today for an appointment at the Advanced Dental Sleep Treatment Center in Omaha.