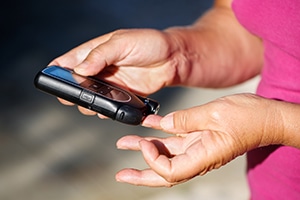 For this study, researchers took 39 subjects with a diagnosis of prediabetes and obstructive sleep apnea were assigned randomly to two groups. Twenty-six participants received treatment with CPAP while the other 13 were given an oral placebo (fake pill). All participants were given a number of diabetes tests both at the beginning of treatment and after two weeks of treatment. These tests included intravenous glucose tolerance testing and insulin response testing.

Researchers found that glucose levels and insulin response improved significantly for those receiving sleep apnea treatment compared to those that got an oral placebo.

This study is an important start in helping us to understand that the sleep apnea and diabetes connection is not just one-way. Not only do we know that sleep apnea can contribute to diabetes, but now we are learning that treating sleep apnea can reverse diabetes. But it’s just a start. We need more research to be sure.

Perhaps most importantly, we need to know whether treatment with oral appliances can give us the same results as CPAP. In this study, patients were closely monitored for two week to ensure compliance, but many people have difficulty sticking with CPAP treatment long-term. Other studies have shown that poor CPAP compliance can interfere with its effectiveness as a diabetes treatment.

If you would like to learn what your sleep apnea treatment options are, please call (402) 493-4175 for an appointment with an Omaha sleep dentist at the Advanced Dental Sleep Treatment Center.