We know that most people who have sleep apnea haven’t been diagnosed by a doctor. However, we have partly counted on people being able to identify sleep apnea symptoms to help them seek diagnosis and treatment. But now a new study suggests that many people with sleep apnea may not experience the key symptom of daytime sleepiness, even though they have serious sleep apnea. However, they may still have increased risk of car crashes, and other people around them may see the problem. This means that people and their doctors have to be on the lookout for other telltale sleep apnea symptoms as well. 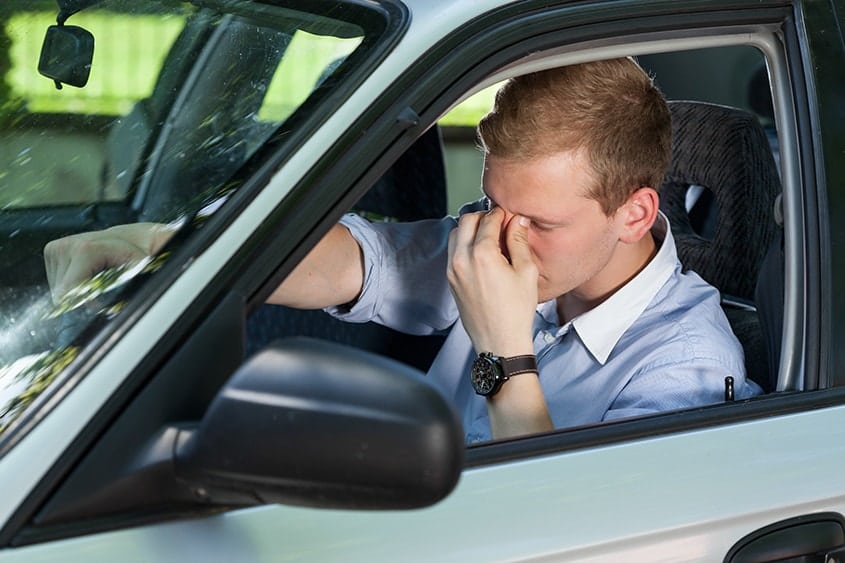 For this study, researchers wanted to explore the link between sleep deprivation and car accident risk. They focused on the two most common sleep disturbances: sleep apnea and short sleep duration. They used data from the Sleep Heart Health Study, which gave data on health and sleep from 1745 men and 1456 women age 40-89.

Although recommendations recognize that not everyone needs the same amount of sleep, researchers wanted to focus on short sleep because it’s so common, affecting up to 30% of American adults. For the purposes of this study, short sleep was defined as sleeping 6 or fewer hours a night.

One explanation for this is that people who are chronically sleep deprived just aren’t aware of how tired they really are. Instead, their awareness of being sleepy plateaus, and they begin to perceive their sleepiness as relatively normal, even though their performance is clearly compromised.

Watch for Other Signs of Sleep Apnea

We already knew that people with sleep apnea are more likely to get into car accidents. The key insight of this study is that people often don’t know when their performance is impaired by sleepiness. That means that people and their doctors need to be on the lookout for other symptoms of sleep apnea, including:

You should also keep a watch out for signs that you’re dozing off or zoning out in the car during your daily commute.

If you have symptoms of sleep apnea, you should talk to a doctor, even without daytime sleepiness. A sleep test is the only definitive diagnosis for sleep apnea.

To learn more about the benefits of comfortable, convenient sleep apnea treatment with an oral appliance in Omaha, please call (402) 493-4175 today for an appointment with a sleep dentist at the Advanced Dental Sleep Treatment Center.