It’s hard to say why some studies catch media attention and get broadcast widely while others do not. For years, the evidence has been mounting that sleep apnea contribute to brain damage, leading to memory problems. We even discovered an important mechanism that shows how sleep apnea can put a person at greater risk for Alzheimer’s disease, but these stories haven’t received the attention they deserve.

Now, though, a new study showing the link between sleep apnea and cognitive impairment is being broadcast widely. And because the study shows that sleep apnea treatment makes a difference, it will hopefully lead more people to seek treatment that they are likely to use, rather than not getting treatment or sticking with treatment they can’t stand and don’t use. 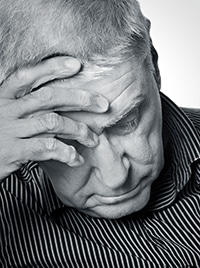 Researchers at the NYU Langone Medical Center reviewed the medical histories for nearly 2500 people ages 55 to 90. They classified these people into three categories:

Researchers also looked at the impact of treatment. They found that the use of a CPAP machine was associated with a 10-year delay in MCI diagnosis, an average of age 82, compared to 72 for those who didn’t treat their sleep disordered breathing.

Treatment Is Important, and You Have Options

The authors of this study were careful to note that the design of their study doesn’t allow them to claim a cause-and-effect relationship between sleep apnea and cognitive decline or between treatment and the delay of cognitive decline. However, when combined with the other evidence we have about the mechanisms of sleep apnea and its impact on the brain, this study does seem to strongly suggest that sleep apnea plays a causal role,and  that treatment reduces the impact.

One limitation of this study is that it only focuses on CPAP, which is a treatment option that many people just can’t tolerate. The good news is that for many people an oral appliance can give the same or similar results to CPAP.

If you would like to learn whether this less invasive and more convenient sleep apnea treatment is right for you, please call (402) 493-4175 for an appointment with an Omaha sleep dentist at the Advanced Dental Sleep Treatment Center today.